Everything You Need to Know About Emu Boots

For centuries people have been using sheepskin and suede for outerwear, especially for shoes. In recent years the material has been in high demand as shoe lovers everywhere have been seeking out Emu Boots. Made from the finest Australian Merino Wool, the lining provides comfort as well as functionality making it one of the top selling shoes on the market today.

What Are Emu Boots?

Produced in Australia and named after its national bird, Emu Boots are made out of 100% Australian Merino Wool. Lined with the wool and surrounded by authentic suede on the outside, these shoes are functional in all weather climates and environments. Designed as unisex footwear, they appeal to all and can be found in an assortment of designs and styles. The softness and warmth of the wool make the boots one of the most popular comfort shoes available on the market to date.

Origins and History of the Emu Boots

While it is nearly impossible to pinpoint exactly when the concept of using sheepskin as footwear material came into existence, it is safe to say it is a centuries old practice that has been enhanced and perfected through modern times. The earlier versions of Emu Boots were made with two pieces of sheep skin attached to soft soles of the feet. In the 1970s surfers were seeking out tanned sheepskin to make boots that could be worn on the sand while keeping their feet warm. Emu Boots originally supplied the sheepskin but quickly caught on that they could also manufacture the footwear and market the boots to the surfers. With the help of the surfers, the boots reached popularity outside of Australia and New Zealand and by 1994 the formation of the Emu Boots Company was officially formed.

With a distinctive look, the boot is recognizable worldwide. What was once a softer soled shoe, the Emu Boot is now constructed with a sturdier and treaded rubber sole for added support and traction. A molded heel also supports the foot in the otherwise easily pliable boot. Signature double stitch seams run along the boot and up the back of the heel for additional strength. Despite design differences among the Emu collection, these features are available in all Emu Boots. 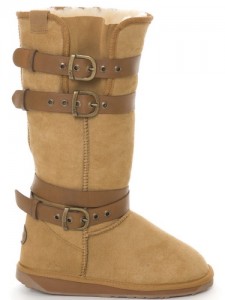 Maintaining the basic boot concept, Emu Boots are offered in an array of colors and styles. Versatile in height, the boots can be purchased in short, tall and mid-calf height. Theses height variations are often referenced as “Lo” for an above the ankle cut, “Mini” for a slightly above the ankle cut, and “High” for a mid-calf height.
Buckles, ties, buttons and other embellishments are now common on the fashion forward boots, but the traditional solid color simple style of Emu Boots are easily available. Children’s and Infant’s boots are especially fun with animal and pattern styles available.

How to Wear Emu Boots

The sheepskin is meant to quickly absorb moisture and draw it away from the skin, so it is best to wear the Emu Boots without socks. Warm and a natural insulator, the sheepskin will keep feet hot on the coldest days but will keep them cool on hot days. This versatility makes them easily worn in snowy and wet conditions as well as on hot summer days.

Popularity of the Emu Boots has made them readily available for purchase just about everywhere. They can be purchased at outlet stores, department stores, local shoe shops, and online. With so many venues available to buyers it is easy to find boots that will compliment any wardrobe or style preference.

Care and Cleaning of Emu Boots

To ensure the longevity of Emu footwear, it is recommended that the sheepskin be sprayed with a stain and water repellent. Before wearing the boots for the first time spray with the repellent so oil and dirt will not be able to attach to the surface and will prevent staining. This is an especially important step for the lighter colored boots. Cleaning Emu Boots is quite easy with a simple damp cloth cleaning and small amounts of suede cleaner.

Emu also makes a boot cuff, which is a terrific accessory that can be pulled over any Emu Boot for an additional look. Made from the same fine Australian Merino Wool, these knit cuffs fit over the boots for added warmth and style. They can be machine washed and worn fitted or slouched allowing individuals to create their own personal look.

You may also be interested in websites, concerning clothing: sundresses, summer wear and beach shoes, evening dresses, boot cut jeans; and real emu product – emu oil, that made from the fat of emu bird. 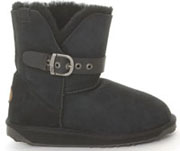 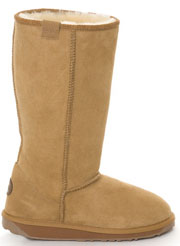 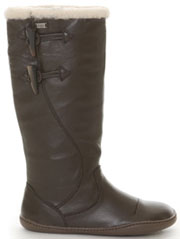 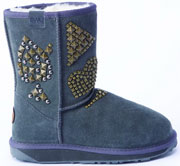